The UESPWiki – Your source for The Elder Scrolls since 1995
Jump to: navigation, search

Welcome to the Unofficial Elder Scrolls Pages! We have been building a collaborative source for all knowledge on the Elder Scrolls series since 1995, and we could use your help! To begin browsing our site, you should select one of the games on the left side menu. If you would like to help us build the site, you can learn how to get started as an editor, read over the help files, or look through our guide to helping out. If you'd like to discuss The Elder Scrolls with other users, please consider using the UESP forums or Discord server.

This site's purpose is to provide information; therefore, most of the content contains spoilers.
All Content • Searching • Questions • How to Contribute • Help Files • Forums
We are currently maintaining 80,629 articles.

Support the UESP on Patreon!

The Unofficial Elder Scrolls Pages would like your help supporting our site and projects via Patreon. Please consider becoming a supporter over on Patreon.

By supporting our Patreon, you can receive numerous benefits, such as:

We hope you will join us on Patreon.

The Elder Scrolls Online Bounties of Blackwood event has finished, and event rewards are now available in the Crown Store for free to Blackwood owners. In addition to the previously announced rewards, this bundle also includes the upcoming Deadlands DLC, so be sure to grab it within the next two weeks.

As a result of community stretch goals being reached, an additional Explorer's Celebration mini-event has kicked off today, and will run until the 20th of October. This event is available to all players and offers increased XP, gold, and resource node drops in all zones.

The Elder Scrolls Online team have announced an upcoming event for people who have the Blackwood Chapter. This event, called "Bounties of Blackwood", will focus on the Blackwood Pathfinder achievement. Community progress will increase by visiting all of the striking locales of Blackwood, and can be tracked by this progress bar. More rewards will be unlocked as the progress bar is filled in by the community:

Additionally, a mystery prize will be unlocked at 100%, which will be revealed at the Gates of Oblivion Year-End Stream. If you have already unlocked the achievement, your progress will be retroactively counted, and you can still help by unlocking it on another character again.

There will also be bonuses for adventuring in Blackwood during this period, with Glorious Blackwood Legates’ Coffer rewarded for the first daily quest completed each day, and regular Blackwood Legates’ Coffers rewarded for performing more daily quests or completing other tasks. Lastly, normal reward boxes will have their contents doubled during this period, harvest nodes will yield more, drops will be better, and you can earn event tickets during the event.

Bounties of Blackwood will begin on September 30th at 10AM EDT, and end on October 12th at the same time. You can learn more from the official announcement or from our article.

In addition to this paid upgrade, owners of the Special Edition will receive a free update which adds fishing, Survival Mode, and Saints & Seducers to the game for free. Those who own the Special Edition on Xbox One and PS4 will also be receiving a free next-gen port to Xbox Series X|S and PS5 respectively.

You can see the official announcement here.

The soundtrack for The Elder Scrolls Online: Blackwood has been released. The original soundtrack has been made available on Spotify, iTunes, YouTube Music, and Amazon.

You can see the official announcement here, and you can learn more about the soundtrack on our article.

The next two DLCs for The Elder Scrolls Online have been announced at the Xbox and Bethesda E3 conference.

The next DLC is a dungeon pack and will be named Waking Flame. The fourth and final DLC of 2021 is titled Deadlands. It is a zone DLC and will take place in Mehrunes Dagon's realm of Oblivion, the Deadlands. Both of these updates are part of the year-long Gates of Oblivion storyline. Further details on both DLCs will be forthcoming at a later date.

An ESO Plus free trial will be kicking off today, June 14th, in anticipation of the release of the Console Enhanced edition on Xbox Series X

The Blackwood chapter for ESO officially launched on PC/Mac on June 1. Console release is scheduled for June 8. This new expansion adds the Blackwood zone, a marshland spanning the southern reaches of Cyrodiil and stretching deeper into Black Marsh than was previously seen in The Elder Scrolls IV: Oblivion.

To coincide with the launch of Blackwood and Update 30, the Champions Reforged mini-event has kicked off and will last for two weeks from launch. During this period, Champion Point respecs can be done for free.

Interested in learning more about the upcoming Elder Scrolls Online Chapter: Blackwood? UESP was given access to explore a special Preview build and have been playing through it for the past week. We wrote a post with all the new features we were able to test out over on the UESP Blog.

Tiber Septim, also known as Talos Stormcrown, Hjalti Early-Beard, and Tiberius Imperator was a military leader who became one of the most famous figures in Tamrielic history, reigning as Emperor Tiber Septim from 2E 854 to 3E 38. Tiber Septim started his career in service under the Cyrodilic king Cuhlecain, where he was known as General Talos. In this role, he fought to unify Cyrodiil and finally all of Tamriel, an effort that culminated in 2E 896 with the birth of the Third Empire. (more...) 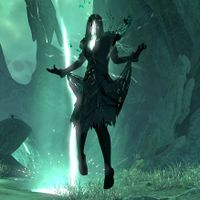 The UESP is one of the oldest independently-run gaming websites on the Internet, and has been supporting the Elder Scrolls community since 1995. You can support the UESP's continued operation through our Patreon, as well as receive various benefits. Another way to support UESP is to join the editors who help build the site. You can learn more about that here.

Support us on Patreon
Retrieved from "https://en.uesp.net/w/index.php?title=Main_Page&oldid=2464919"
Category:
Hidden category: